When Paul Verhoeven was the jury president of the Berlinale, we supported our friends at Markenfilm Berlin with this awesome idea: an autonomously driving Audi A8L with an animatronic robot behind the wheel. Count us in! 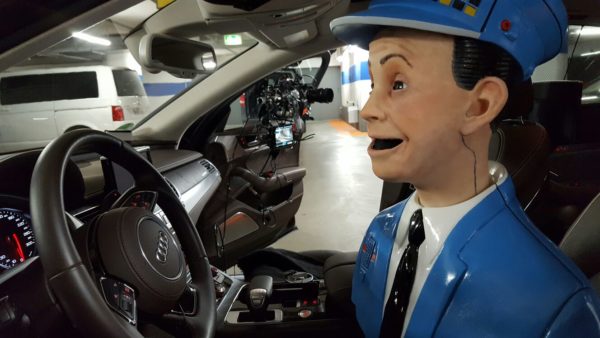 Max: As a child of the eighties, I'm a huge fan of films like Terminator, Running Man, Escape from LA, Universal Soldier, Robocop, Rambo and of course..Total Recall. And especially of Paul Verhoeven as a director in general. So this was the perfect job for me. André Aimaq developed an awesome script for the film and we originally planned to pick up Paul Verhoeven himself. Unfortunately he was too busy to participate in this project, so we were super greatful for Clemens Schick to jump in.

The Johnny Cab robot was operated by two technicians. One controlled the head and eye movement while the other was in control of the mouth.

We mounted several cameras on the Audi and always had one camera man in the car as well. In total it was three persons in the car while one robot sat behind the wheel. You can not even imagine how strange that felt. Especially while driving around the Berlinale.