Audi wanted to try something new with presenting their wide range of premium After Sales products. We presented even the tiniest product in an impressive mixture of CGI, high class set design and cinematography.

We produced 12 individual product clips for each month of the year. All with a special focus on usability in diverse Social Media formats. Meaning 9:16 Instgram Clips or 6sec. Bumber Ads for Youtube.

This was the most crucial part of the project, because Scholz & Friends and us were pretty demanding with how the overall mood of the set should feel like. We ended up with the absolute maximum of what was possible in budget.

Several huge pillars in a concrete look, an asphalt like floor with reflection elements, a hole bunch of Astera Lights and an overall sophisticated lighting setup. The guys at Gegenlicht Design were getting the most out of the excellent set by Woodland Studios.

As a production company with a special focus on Social Media, it was our own claim to get the most out of the footage. Framing content in a 9:16 ratio results in several consequences. The set has to be bigger to fill out the top and bottom space around the object.

It's also tough to get horizontal objects into this ratio, but the struggle was worth it. Some of our product films look even better in 9:16 instead of 16:9, because the shots limit themselves on the essential region.

We had to produce 12 films on two shooting days, so we needed a crew that works like a clockwork. The Director, DoP and Production Assistent invested a load of time into planning the shooting order and technical aspects upfront. There was no wiggle room to switch major light sources while shooting. Ben from Gegenlicht Design and his guys were doing an awesome job with accomplashing this task.

Of course there's also a huge credit on behalf of Woodland Studios. They built the perfect set in an impressive amount of time and made it as accessable und movable as possible, to fullfill our Director's wishes. This also goes for the amazing fake ice for the "Eiskratzer" spot.

Normally we don't rely on AD's or Line Producers, because it doesn't quit fit into our way to approach our shoots. In this case, it was clear from the beginning, that we needed someone like Marc on set. This support helped with enabling everyone on set to focus themselves on their own task a little more.

This came in especially handy for our director, who had some additional time to craft himself some new superhero masks to entertain the camera crew. 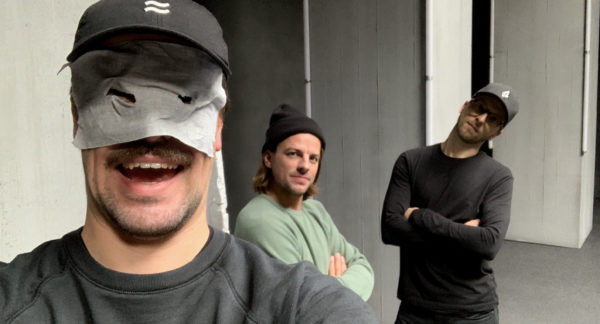